Giant sequoias and fire have coexisted for centuries. Climate crisis is upping the stakes

It is still unclear how the giant sequoias of California will fare as two fires – which together have scorched more than 140,000 acres in their namesake national park and national forest – continue to burn. Thick smoke and rugged inaccessible terrain has hindered efforts to assess destruction from the KNP Complex and Windy fires, and a full accounting may take weeks.

Scientists on the ground say so far the news has been both good and bad. There are still pockets of lush greenery left within the footprints of two fast-moving fires, as well as areas where the flames left little in their wake.

But one thing remains abundantly clear: with drier and hotter conditions, the fires the forests – and the stakes – have changed. 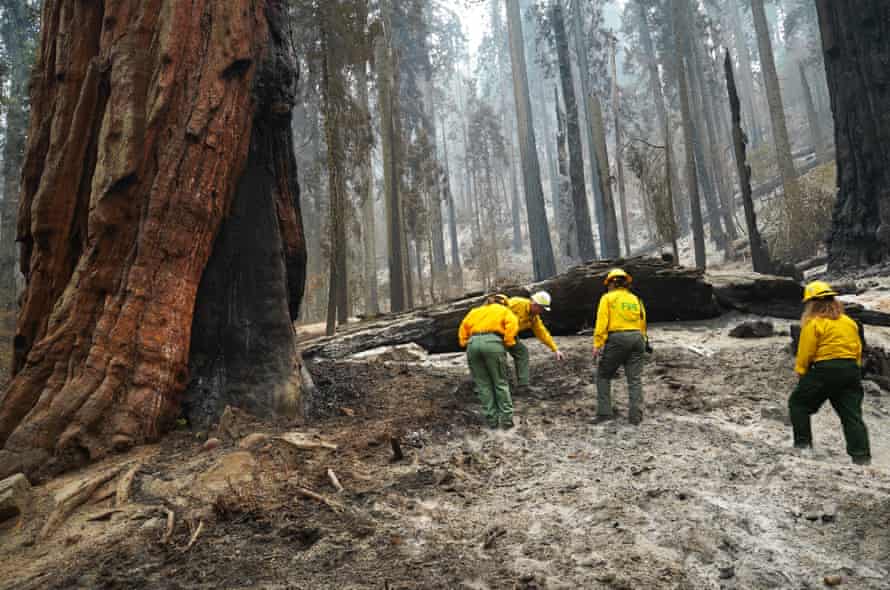 The incredibly resilient giant sequoias that have grown on these ridges for thousands of years, coexisting and evolving with wildfires that helped keep overgrowth at bay and clear space needed for seedlings. But as the climate crisis intensified conditions, causing fires to burn bigger and hotter, the tall trees are starting to succumb in larger numbers. During last year’s Castle fire, which blackened 175,000 acres in Sequoia national park, up to 14% of the world’s sequoias were lost to the flames – an alarming development for the trees once believed to be largely fire-resistant.

Scientists are now afraid the species may not survive if wildfires continue to grow more severe.

“I have been suspending disbelief before I enter any grove,” said Garrett Dickman, a biologist at Yosemite national park, who is involved in the damage assessments in the groves impacted by the Windy fire. He has already witnessed spans of torched land where the fire burned so hot the trees were incinerated down to the last twig and branch. In one grove, where he counted 29 of the tall trees destroyed, the ashen aftermath was littered with fallen fragments, their original shape burned into the soil. “You can almost think of it like a chalk outline of a giant sequoia,” he said.

Climate change has set in motion a devastating cycle, made worse by years of land management practices that enabled the forest to become overgrown. Parched vegetation fuels the fires as the hot, dry conditions whip flares faster and higher into the forest canopy, threatening the trees that once thrived in the flames. 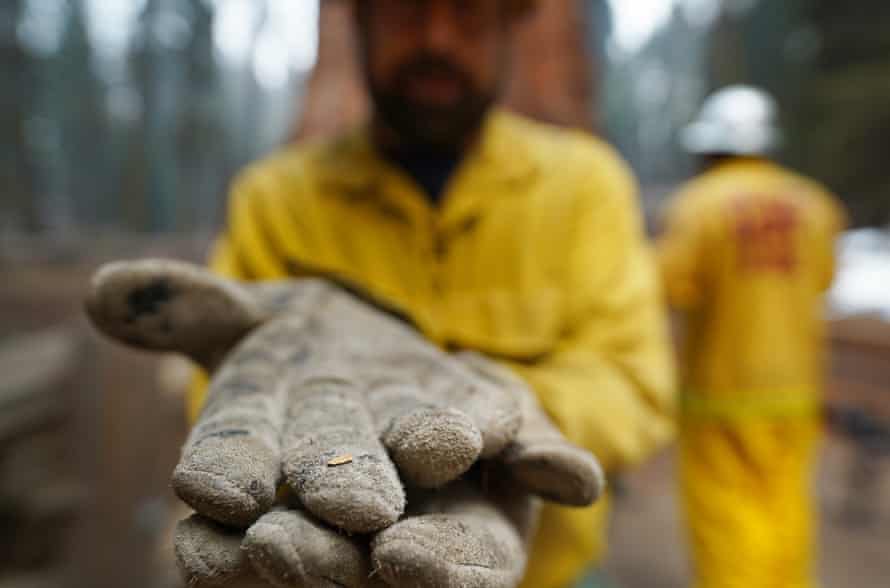 Mike Theune, with the National Park Service, holds the seed of a giant sequoia on the tip of his gloved finger. The seeds are released as fire heats the cones of the tree. Photograph: Getty Images

Mired in drought, the overgrowth dries and dies, littering the forest floor. In nearby Yosemite, where Dickman typically works, he said there was an eye-popping 125 tons of biomass that needed to be removed on every acre – more than 10 times the amount he calls normal. “It is like having a 737 made of wood parked on every acre, but instead of it being full of jet oil it is full of kiln-dried lumber,” he said. “When it burns, it burns hotter, drier and faster than ever before. Trees that were totally immune to this in the past are no longer.”

The death toll for the trees is expected to be significant. But there have also been big wins during the at-times-dramatic firefights, and many popular groves have been spared. In others, where the flames got in but severity was low or moderate, researchers believe the burn will be beneficial.

Anthony Ambrose, a forest ecologist and researcher at the non-profit organization the Marmot Society, said the fate of a grove depends on what condition it was in before the fire and the weather patterns, such as wind, heat and humidity, when the flames burned through. But even if trees survive the flames, they may be weakened enough to succumb to other ailments, such as beetle attacks.

Ambrose says scientists have been seeing such attacks on singed trees, further weakened by the drought – a phenomenon that had not been documented until recent years. “If they are healthy trees, they are able to fight off any attack but what we are seeing now is this kind of novel combination of impacts from fire and drought that are making the trees vulnerable.”

With little relief on the horizon and another dry winter in the forecast, drought conditions are expected to worsen over the next year. That does not bode well for scorched sequoias. 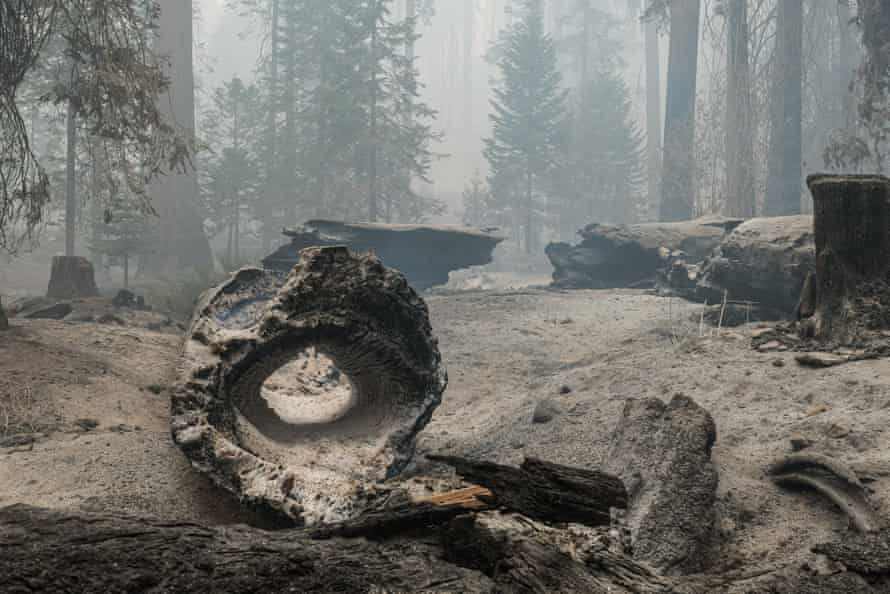 Nathan Stephenson, a government scientist based in Sequoia national park who has studied the impact climate change is having on forests, said the outcome could become a permanent shift. “There is a good possibility that a lot of these forests may not come back as forests in our lifetime,” he said, adding that other plants and trees could soon replace the giants that have stood there through the centuries. “People often think that because climatic warming is happening slowly … ecosystems are going to change slowly and adapt as the climate changes.” Instead, he explained, the climate hits a threshold that can change landscapes and ecosystems in abrupt and extreme ways.

“You have burning conditions we haven’t seen in the past,” he said, noting that crown fires, when flames soar high into the air and burn through canopies, were never before seen in giant sequoias.

Still, there will be many areas where fire behavior is not extreme. Stephenson said this isn’t either a bad story or a good one. It’s both. Fire is an essential ingredient for forest health and even in big blazes that exhibit extreme behavior there are often important benefits.

“It is certainly bad when 10-14% of all big sequoias get killed but other groves in that fire burned in a beneficial way that will make them more resilient to wildfires in the future,” he said of the Castle fire last year. “The same thing is going on now.”

In the aftermath of this year’s fires, there will still be big steps to take. Policymakers will have to decide whether to replant the areas that were severely burned and how to clear the fallen firs and pines killed in the flames from the forest floor. It won’t be long before the victims of this fire act as fuel for the next one. “You have a window where you can catch your breath,” Stephenson said. “But we are still going to have to look to the future.”